St. Michael’s School is situated on a three-acre campus in east-central Tucson. A true marriage of old and new, the school encompasses 21 classrooms built around four traditional Spanish courtyards ornamented with fountains and native plantings.

Famed Swiss-born architect Josias T. Joesler designed the original church and rectory in a Pueblo Revival style, relying entirely on mud-adobe and timber construction. Over the years, a number of improvements and expansions—carefully adapted to Joesler’s original vision—have been made to the physical plant to accommodate the School’s growing enrollment. The additions of dedicated spaces for fine arts, music, science, and technology, are just some of the recent facility improvements. Other features of our remarkable campus include:

For many, however, the heart and soul of the school is still our beautiful chapel, where light filtering through majestic stained-glass windows and grandiose tones echoing from our Aeolian-Skinner pipe organ bestow peace and wonderment on young worshippers.

St. Michael’s Parish Day School was founded in 1958, five years after the formation of St. Michael and All Angels Episcopal Church, by the church’s first rector, the Reverend John Clinton Fowler. Father Fowler realized the need to create such a school after discovering that many of his Sunday school students, from various local neighborhoods, could not read. On opening day in September of 1958, thirty-four students enrolled in Kindergarten and first grade.

The school thrived from the start. Within five years, St. Michael’s was serving grades K-8, and the first eighth grade class graduated in 1965. To accommodate growth and add a third class for grades 6-8, the school completed construction of a middle school addition in 1997. An endowment campaign that surpassed the $1 million mark in 2005 has allowed the school to expand its programs while maintaining our high standard of educational excellence.

From the beginning, the school’s curriculum has been strongly academic. As Father Fowler proclaimed, “We teach children to read, to write, to cipher, to sing, and to pray.” While our educational program is grounded in tradition, we believe that students should be exposed to a broad liberal arts curriculum that includes athletics, the arts, and religious study. Our program continues to incorporate skills for 21st Century learners, including creativity, collaboration, critical thinking and communication. The integration of technology as a teaching and learning tool supports the curriculum from kindergarten through eighth grade. Graduates from St. Michael’s leave well prepared for their high school experience, matriculating at top area schools where they are leaders, learners, and friends. 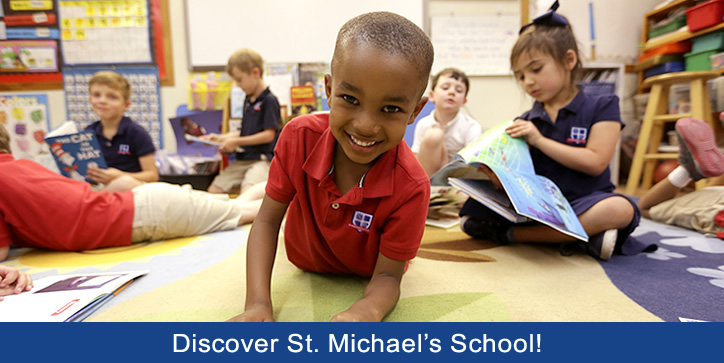