Charting Our Course for the Future…A 21st-Century Plan

The goals of this capital campaign are to support important physical improvements to the campus, give a boost to STEM teaching capabilities as well as enhancing student engagement and learning, and increase the school’s endowment. Learn more by reviewing the Capital Campaign Brochure and video .

We are very grateful for the generous support of the entire St. Michael’s community during our successful three-year (2015-2018) Charting the Course for the Future (CCF) capital campaign. During this initial 36-month period, we received a total of $1,000,000 in individual, family, and corporate and foundation gifts (with another $20,000 in outstanding pledges still expected). With the $1M in funds generated for Phase I of the CCF campaign, we built a new multipurpose room (Tankersley Hall), remodeled the primary school science room, and upgraded the main office and reception area. These funds helped us complete a range of critical Phase I objectives, as noted, with the exception of the air-conditioning project for the Student Center. Due to the required—and at the time unforeseen—need to add a substantial amount of electrical infrastructure to support air conditioning in the Student Center, and cost escalations on the other completed projects, this estimated $225,000 standalone expense for the Student Center far exceeded the $120,000 initial estimate.

Toward the close of the 2018 fiscal year, the Board of Trustees conducted a comprehensive, campus-wide needs assessment. In doing so, given the highest priority needs, our Board has since determined that in addition to raising additional funding to complete the air-conditioning project for the Student Center, all classrooms (Kindergarten through 8 th grade) will require air conditioning as well. As an initial step in this Phase II CCF capital plan, therefore, the Board decided this past year to earmark the $120,000 in surplus Phase I funding to begin the installation of air conditioning in the lower school (K-3) classrooms this coming year. To date, we have initiated the K-3 classrooms project by engaging an architect, mechanical engineer, and electrical engineer for the design work and eventual project bidding. In turn, when the comprehensive bids are complete, the Board and head of school will determine how many classrooms can conceivably be included in this next phase. Within three years’ time, we expect that the entire campus—all classrooms and indoor student spaces, including the Student Center—will be air conditioned. 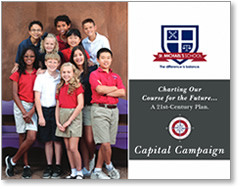